We are back in the land of GoodToKnow yet again, but with good reason. It’s a chocolate pudding, with buttercream, Maltesers, melted white chocolate, and glacé (candied) cherries! A veritable cornucopia of stodgy sickness-inducing ingredients all wrapped up in a massive chunk of sweetness!

At least they don’t recommend you serve it with cream!

So, what degree of trickiness will we experience today?

Reading the recipe is almost like having deja vu all over again. The pudding itself is virtually identical to the chocolate orange pudding yesterday, just slightly smaller quantities. Oh, and there’s no chocolate orange involved either.

So, chuck everything in a mixer, wallop it around, lob it in a bowl lined with greaseproof paper, bang it in the oven. 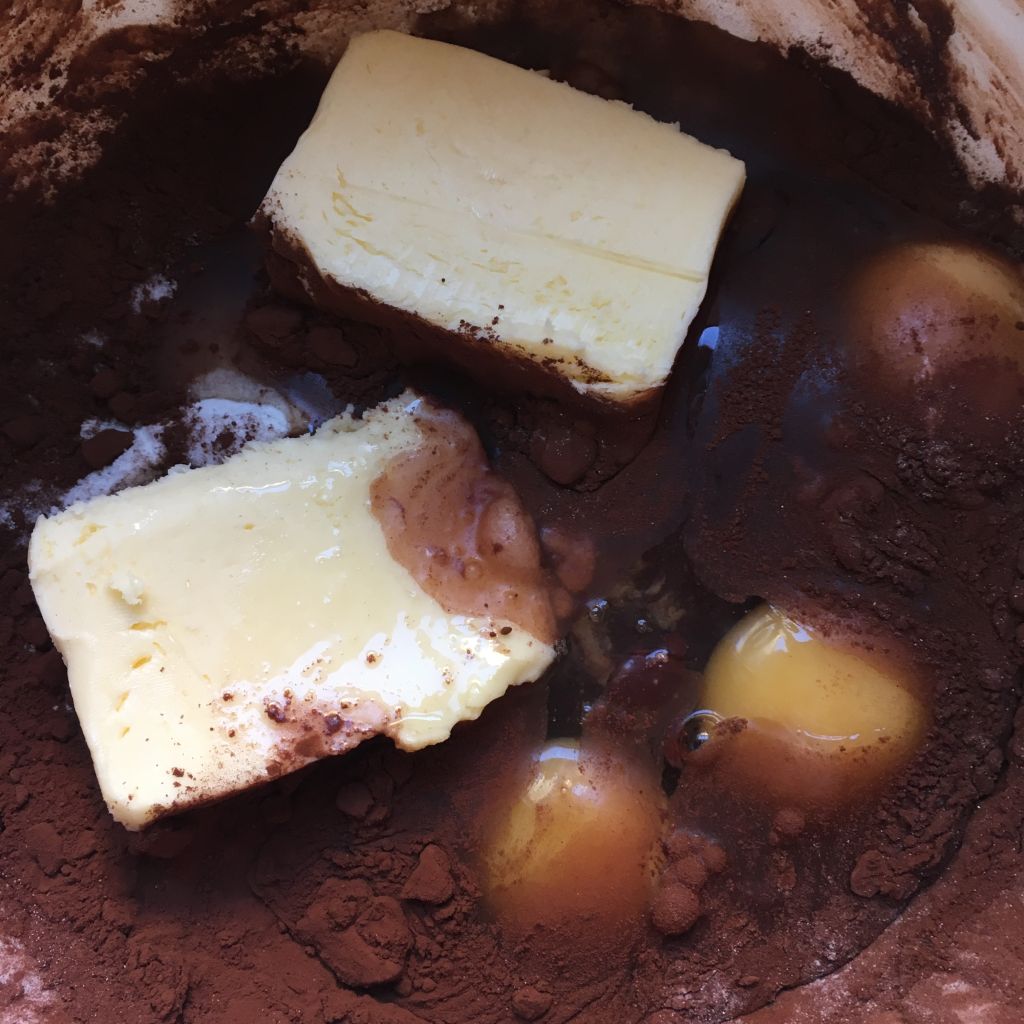 A short while late, you have a chocolate pud. Let it cool, and flip it on a plate. Try not to split it on one side. I didn’t. Just ignore the next photo… 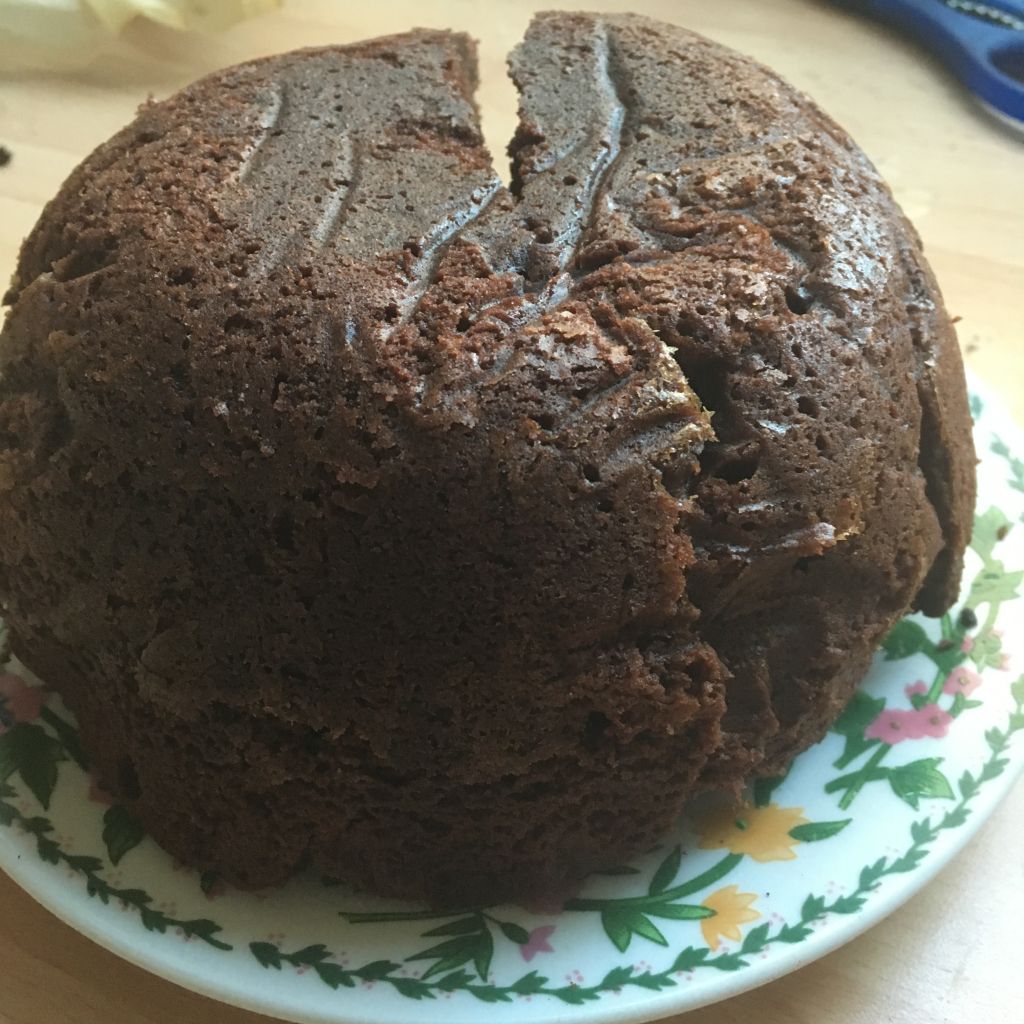 After doing this, I decided that the plate I had chosen was not big enough. Sure, it held the pudding, but there was more to add on top – so I transferred the pudding to a larger, similar, plate. The pudding did not shrink.

The recipe then calls for chocolate buttercream. Willfully ignoring this, I mixed up some regular buttercream from actual butter and icing sugar. Thanks, Nigella, for the make-it-in-a-food-processor plan! 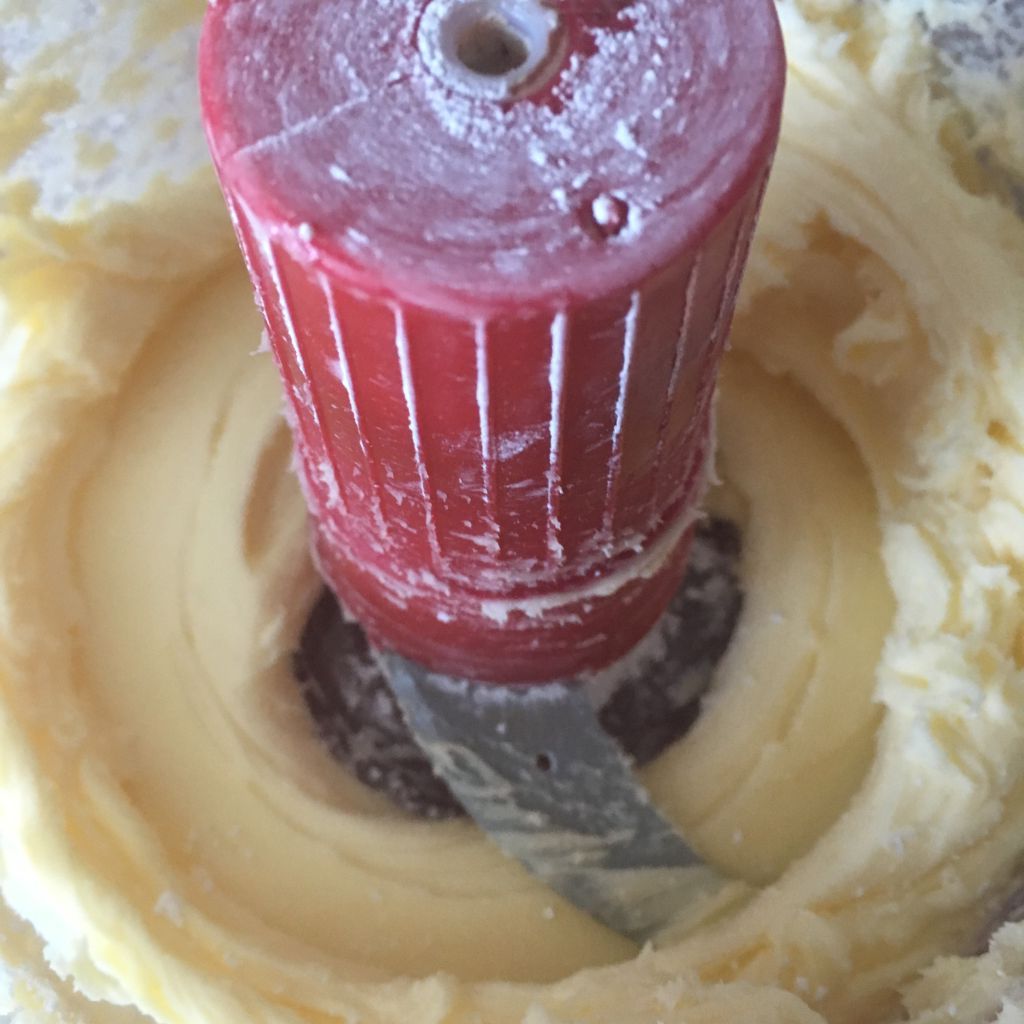 I had slightly less Maltesers than the recipe recommends, and so there are a few little gaps. This is artistic, it is not a problem. 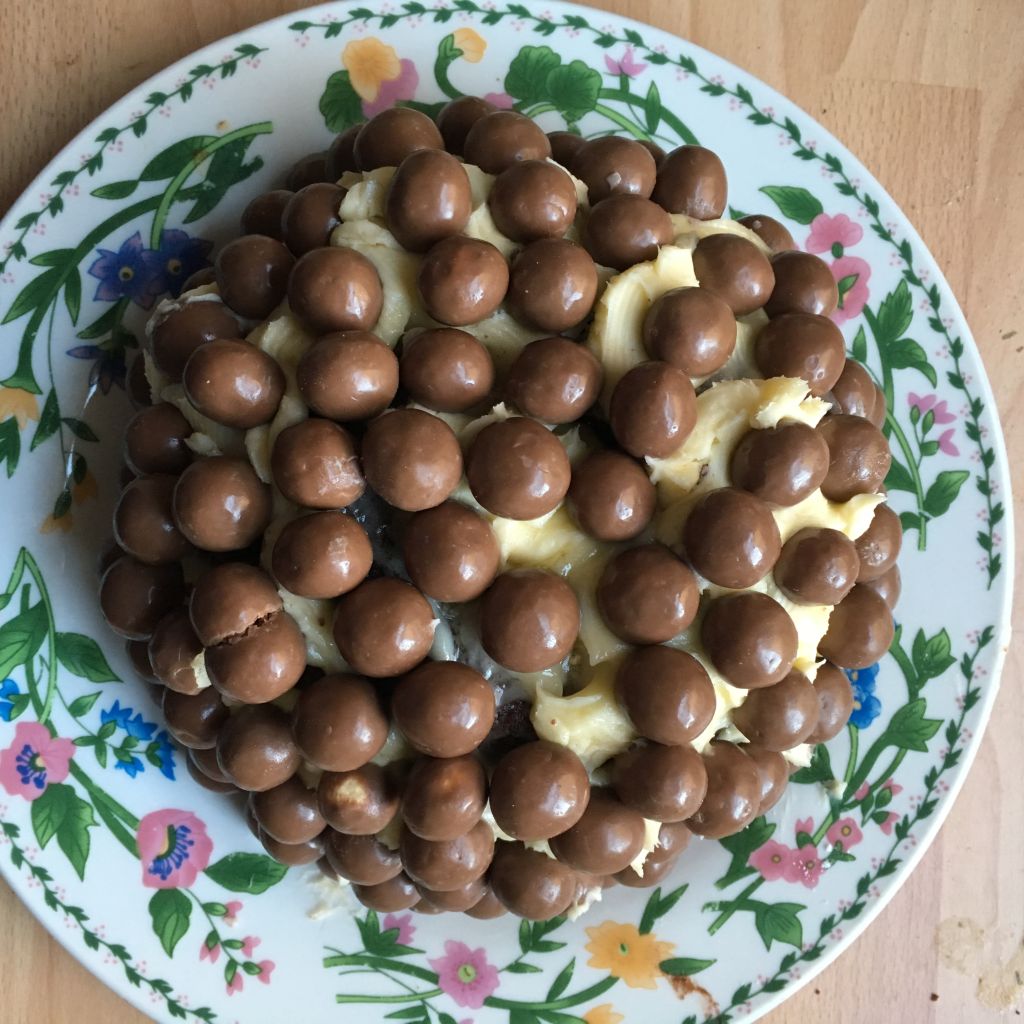 To finish the look of the thing, white chocolate is melted, and poured over the top. It is at this stage that I became tremendously proud of myself for using the larger plate. This could have been a hot chocolaty disaster. 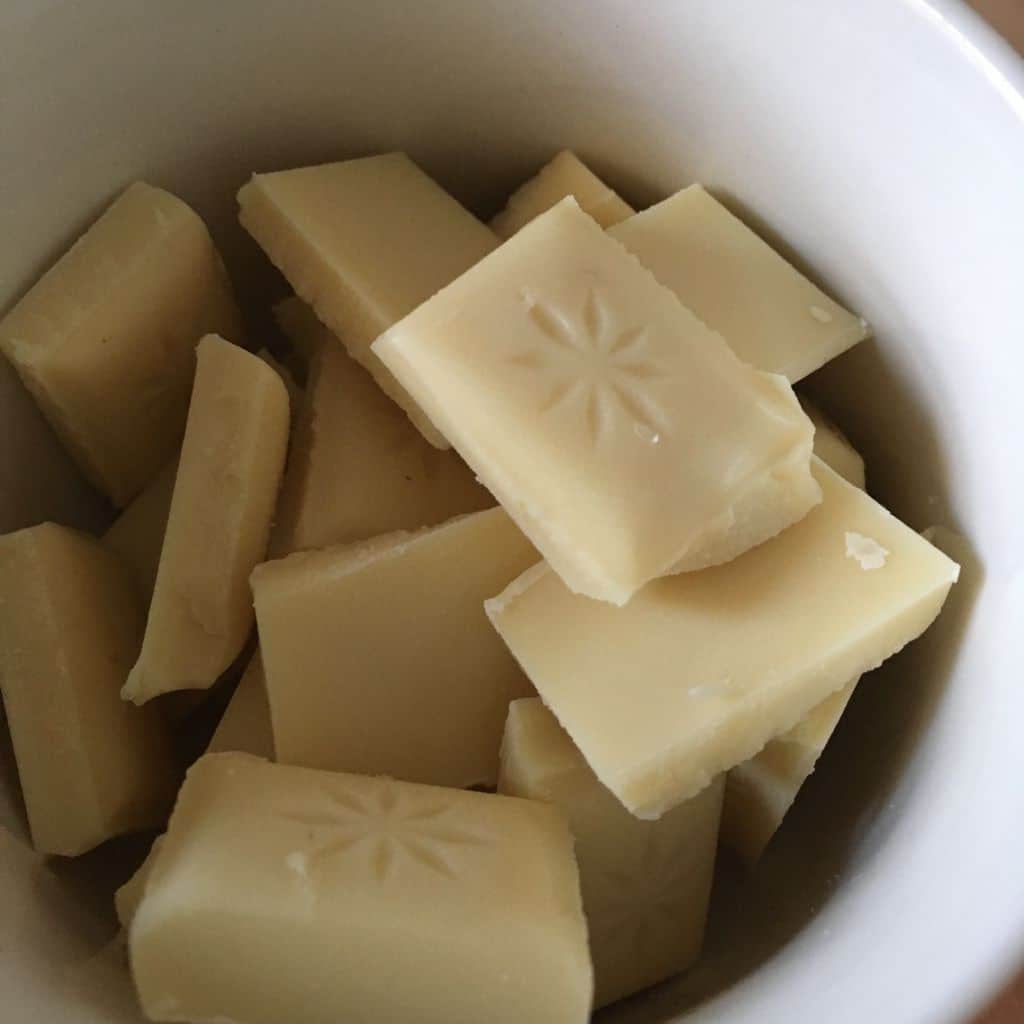 Finally, the pud is decorated with cherries, a bay leaf, and edible glitter. 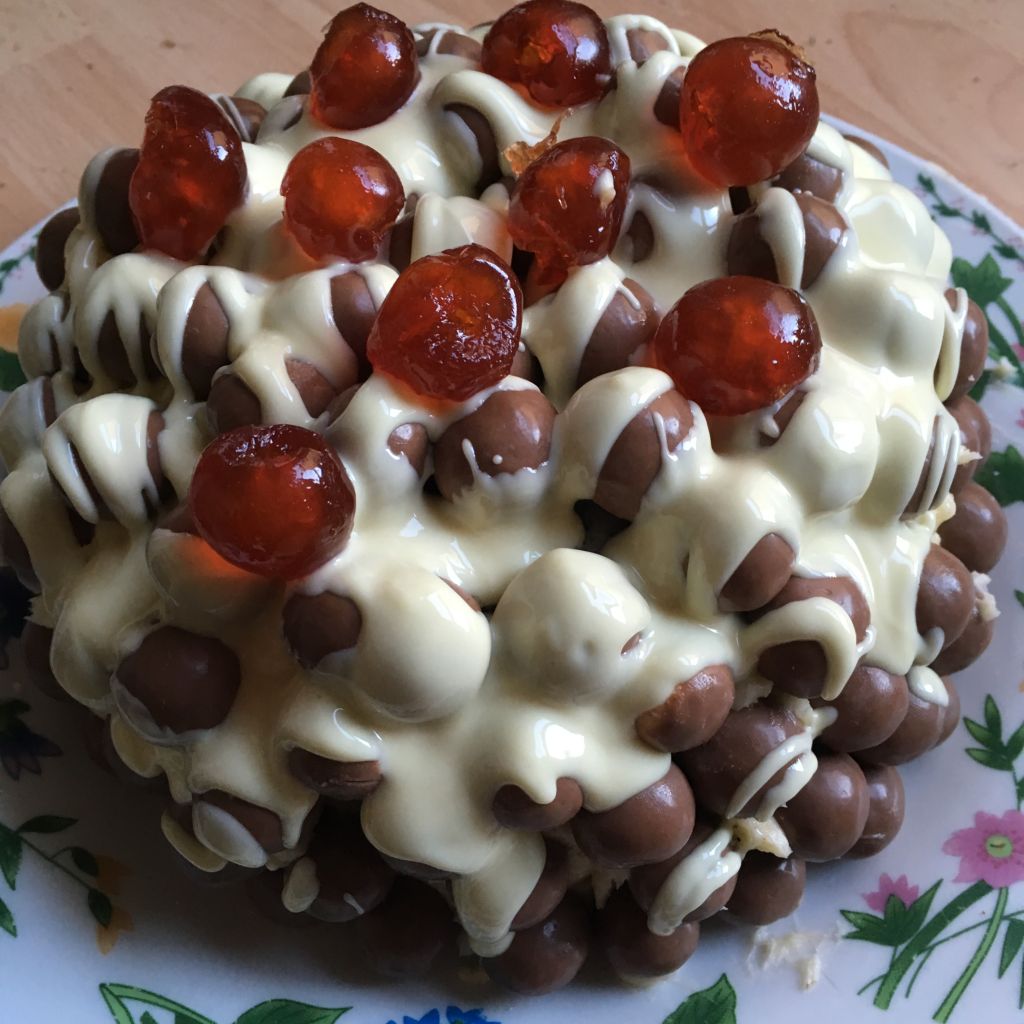 Ha! No it isn’t. I haven’t got a bay leaf, and edible glitter is a ridiculous thing. All glitter is edible. It’s just not good for you. 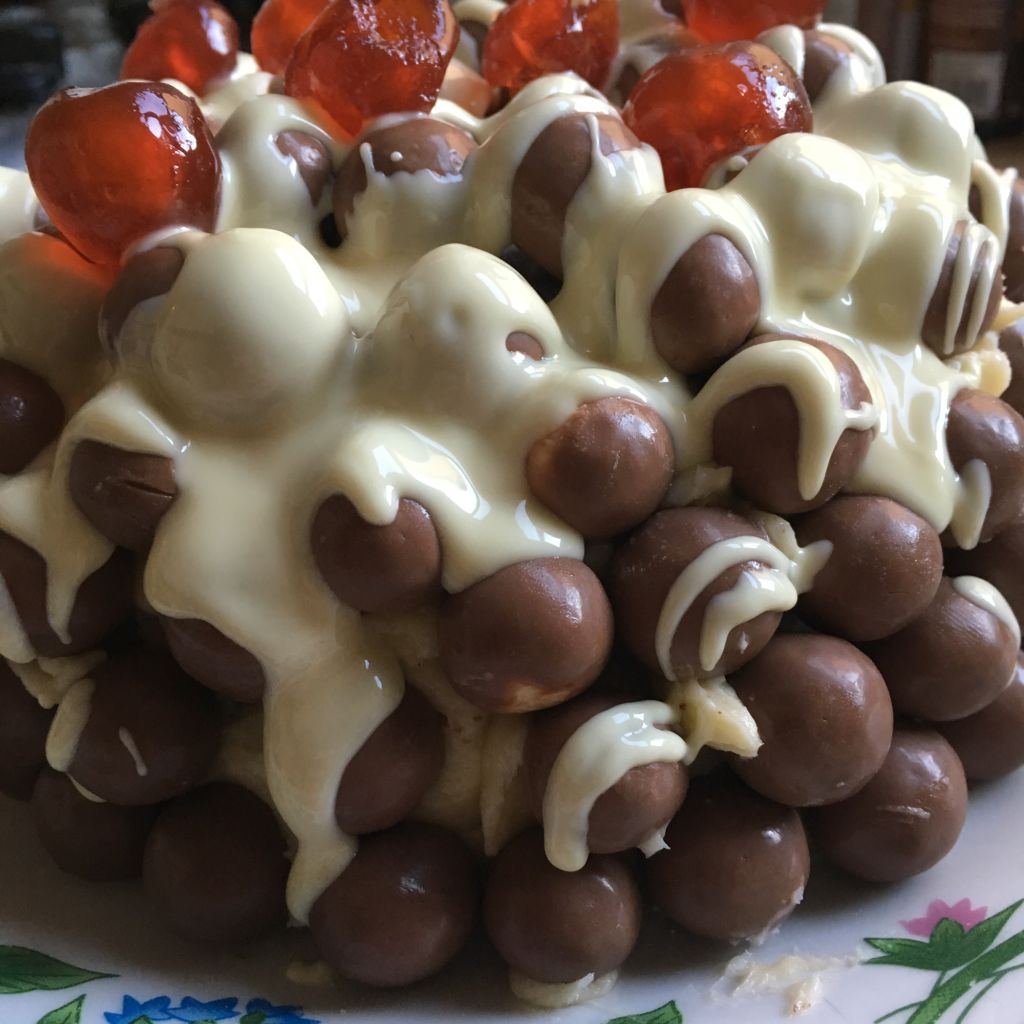 So, in lieu of bay leaves and craft supplies, I chose to add more cherries. And then I ate some. I like glacé cherries, what are you going to do about it?

TL;DR: Chocolate pudding with Maltesers stuck on it. Cherries. Many cherries.