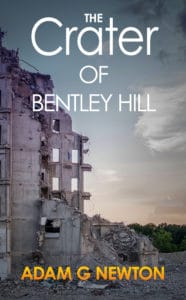 British amateur acting group The Bentley Hill Players are at a loss after their performance hall was destroyed by a bomb – so how are they going to put on another show?

Jim Butler has an idea, and nothing is going to stop him. He’s going to raise the funds to rebuild the hall, even if it annoys his wife. Owen O’Donnell is planning world domination, and a new friend moves in up the road from Lillian Lovelace (and it may or may not be a man, depending on who you ask). Chris and Sophie are not getting along as well as they could, and Zoe is making things worse. Harry Blunt is still in London with his girlfriend, Eleanor, and everyone misses him.

There’s a gangster or two, a Home for the Tragically Confused, several hundred voles, a spooky encounter at Edwinstown Abbey, loaf squeezing, Gavin Foxton doing interviews, and Emily finds out some very interesting things about her family.

Will the hall get rebuilt? Will Owen take over the world? Will Chris make the right choice? Will Harry ever be seen again? Would you squeeze a loaf? And how will The Players deal with an American TV producer and having a gun waved in their general direction?

Buy it on Amazon here: The Crater of Bentley Hill