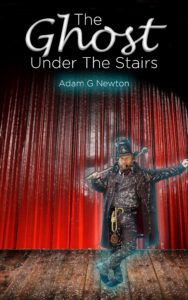 When an amateur acting group put on a show about a haunting, they aren’t prepared for the chaos an actual ghost in the show might cause!

The problems mount up for The Bentley Hill Players, as their cash-flow situation is not good, meaning they might not be able to buy the costumes and build the set – or to hire the hall to perform in!

Local businessman Tom McLean is dead set on selling the hall and having it demolished, but to complicate matters, Tom’s daughter Zoe is one of the leads in the show. Not to mention there are stories that are circulating about a ghost in the hall who keeps trying to get people to look in the toilets.

The show must go on, but with a looming demolition and a bathroom-obsessed spook on the scene, will there be anyone brave enough to perform?

Buy it on Amazon here: The Ghost Under The Stairs