It’s a Christmas recipe again for Recicember! Who doesn’t love chocolate yule log? People who don’t like chocolate, that’s who.

The recipe is from Nigella Lawson, and certainly doesn’t start well – “I know the recipe looks finicky”…I wonder how this is going to turn out…

I’m certainly not keen on mucking about. I can see this is going to involve several bowls.

The intro also mentions it is a roulade, and the last one went OK, so let’s get cracking!

Shares in a bowl company

As expected, it’s the two bowl thing with umpteen eggs separated into their component parts, and walloped around with sugar and various other bits to make a light and fluffy gloop. The steps listed by Nigella are actually pretty close to being individual steps, so bonus marks for that, Nige.

Further bonus marks go to her for using the term “dollop”. That’s a word I can get behind, having used it myself several times before.

The usual desperation set in when she suggested that the egg whites should be added by “folding them in robustly” – I’m still not keen on folding things that aren’t made of fabric, and I’m certainly not sure how to do it robustly. Do I shout at them while I do it? Or perhaps just grow a beard. Am I meant to make bleeping noises? Oh no, wait, that would be “robotly”, not “robustly”.

Anyhoo, the mix was poured upon a prepared tray, chucked in the oven, and I can confirm that the kitchen is still on a tilt. However, the tilt seems to be less than it was before, so that’s beneficial.

Take it out the oven!

After a bit of cooling, I flipped the cooked cakey thing onto some greaseproof paper covered with icing sugar, whilst the icing was mixed up in a food processor.

Apparently this means that you don’t have to sieve the icing sugar. I’m all for this, as it save two jobs – actually sieving the stuff, and washing the sieve afterwards.

When the butter was hurled in, there was a moment or two where the icing sugar clumped to it and made a giant ball, and the processor lurched from side to side, but once it settled down it was all good. 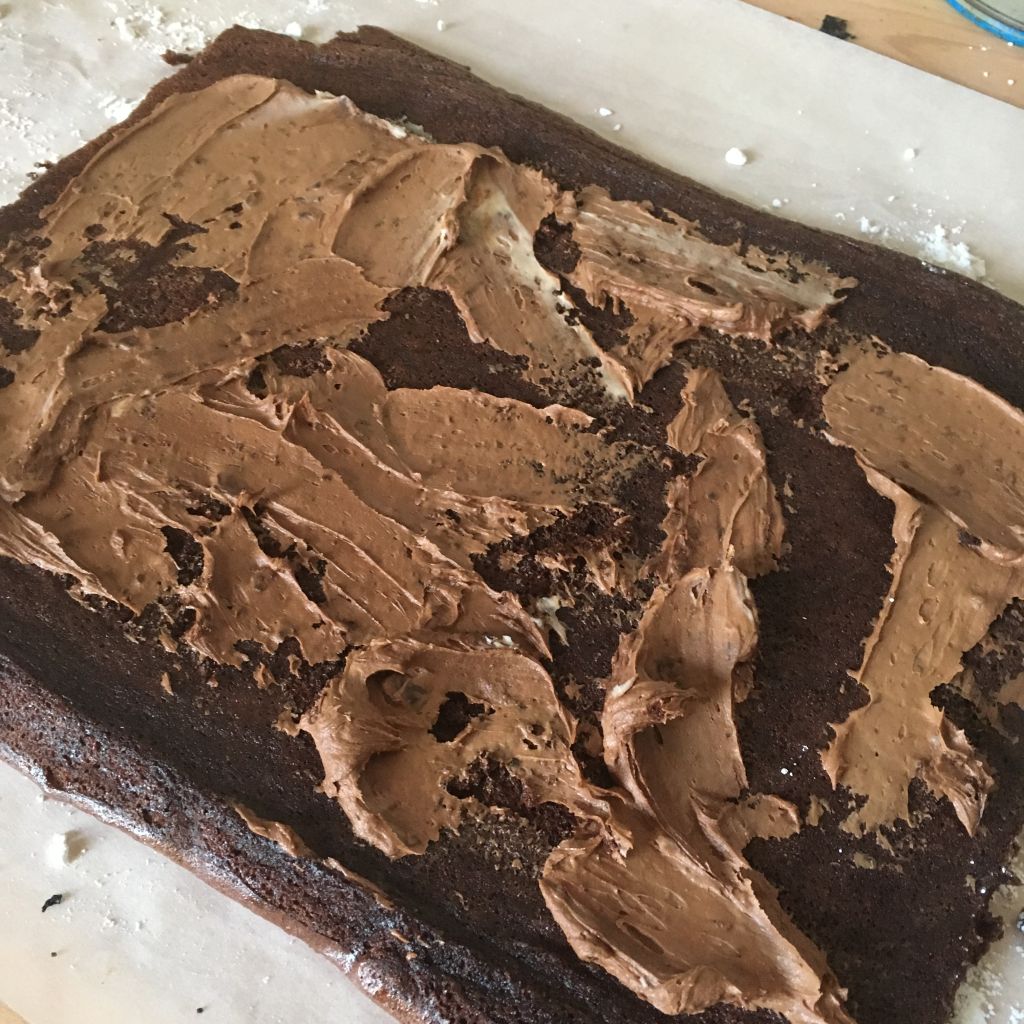 I attempted to spread the icing on the flat log with the back of a spoon, but this did not work. I resorted to dolloping (see?) it out with a spoon and smearing it around with a knife.

Rolling with the use of the paper was quite simple, and it didn’t crack, unlike the other roulade. 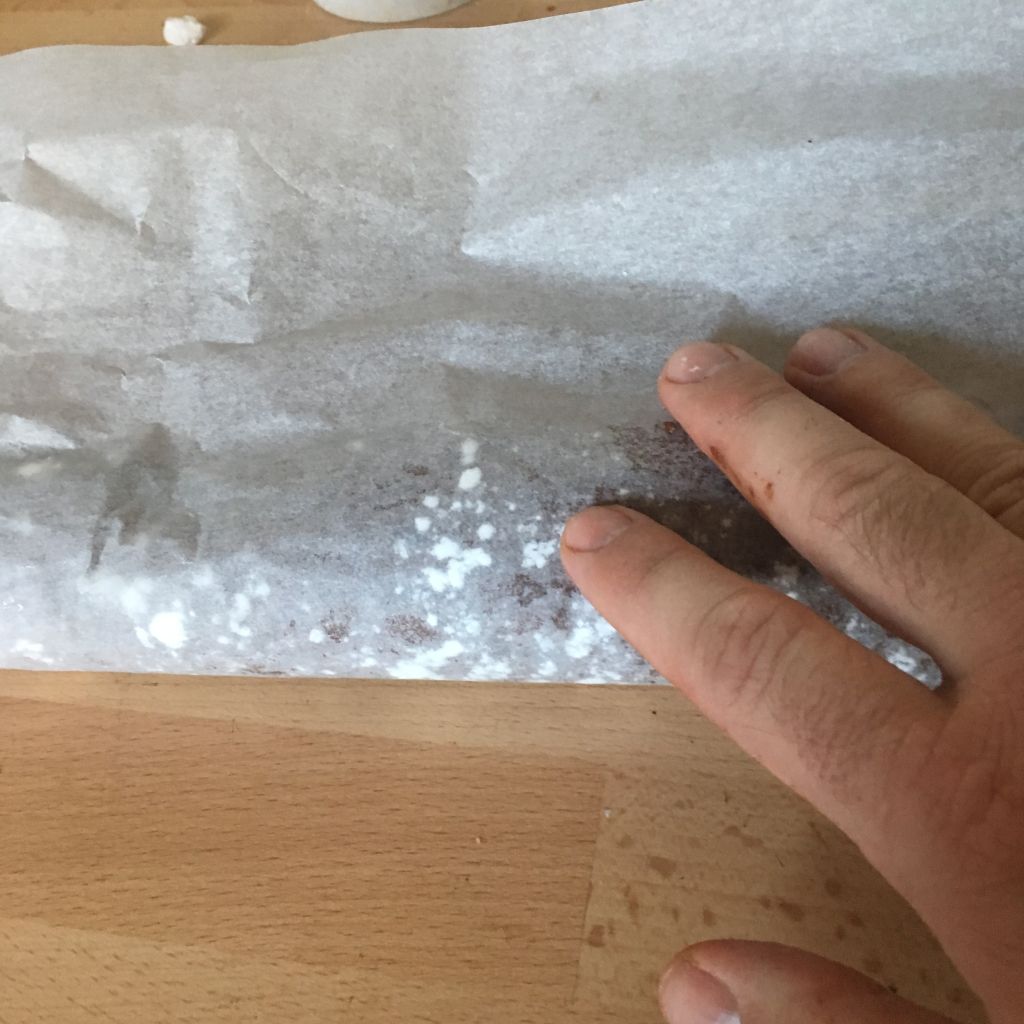 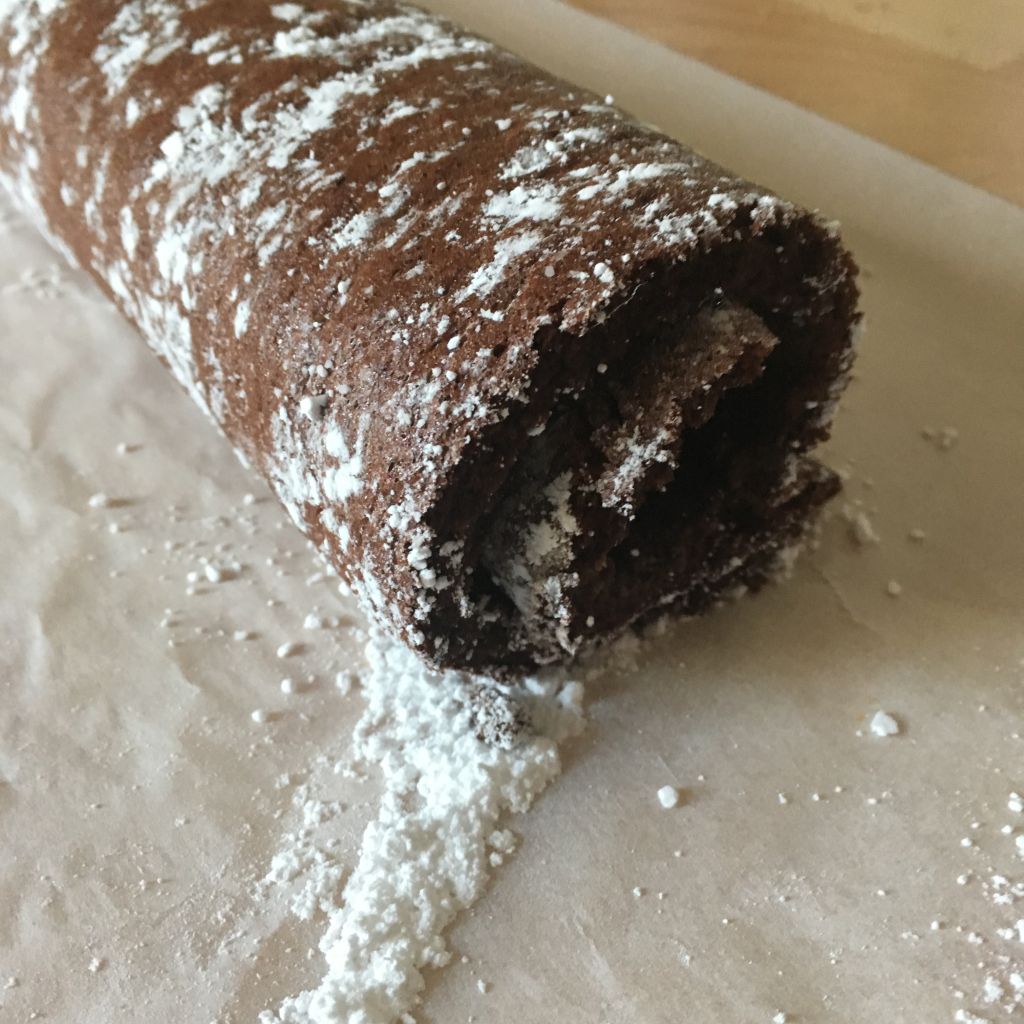 The ends were trimmed, and then the thing was arranged on a plate, and it’s starting to look like a chocolate yule log. 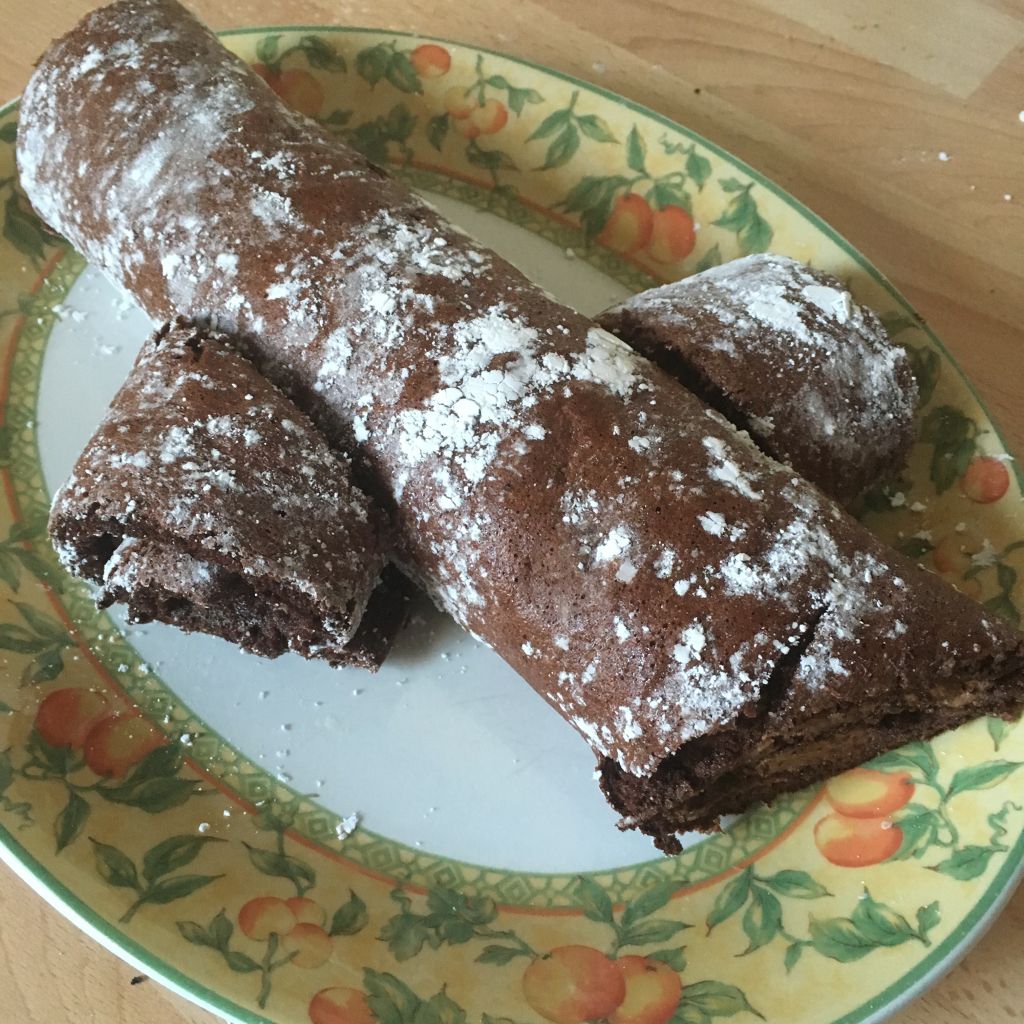 Next, the rest of the icing was thrown at it – literally. It’s not meant to be smooth, it’s a tree. 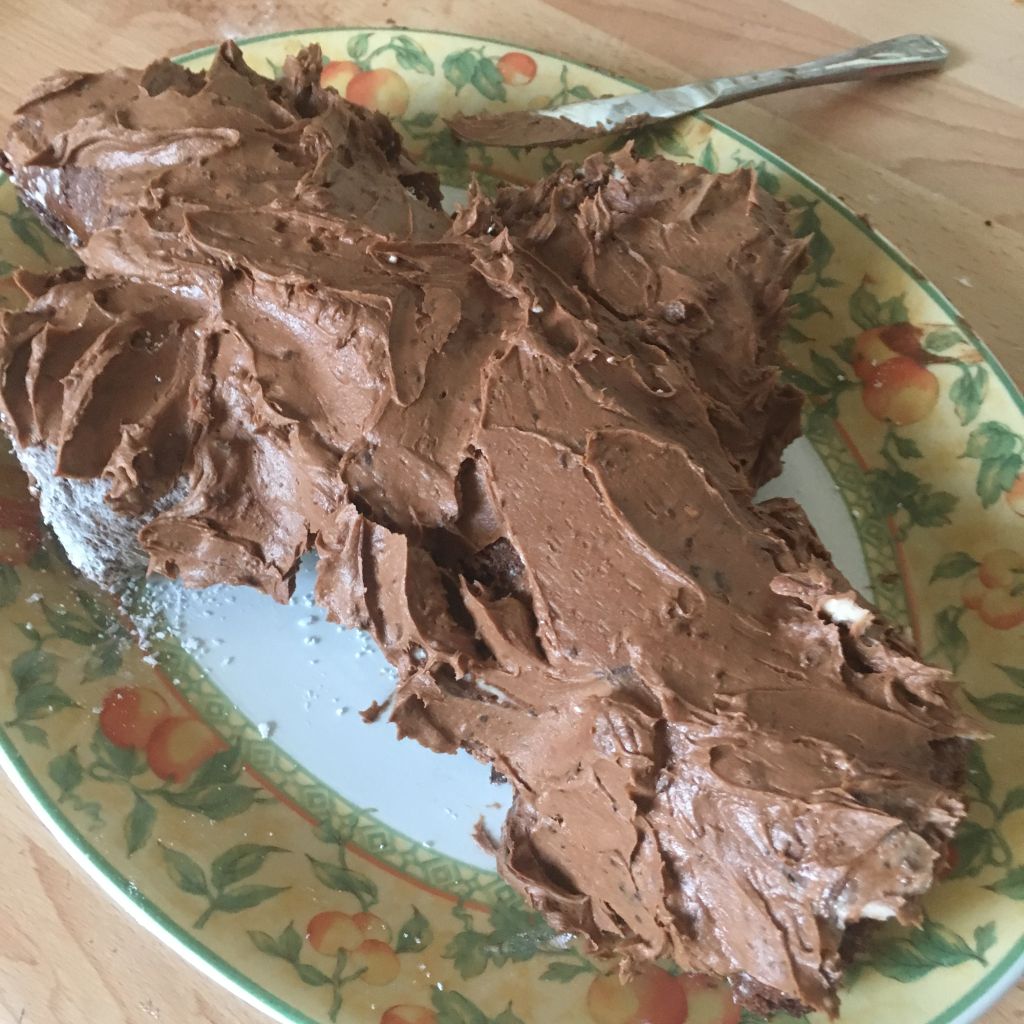 Once finished, there was still a bit of icing left over, but I couldn’t have put it on any thicker without covering the entire plate.

Icing sugar sprinkled over the top finished the whole thing off, and it actually looks like a tree. 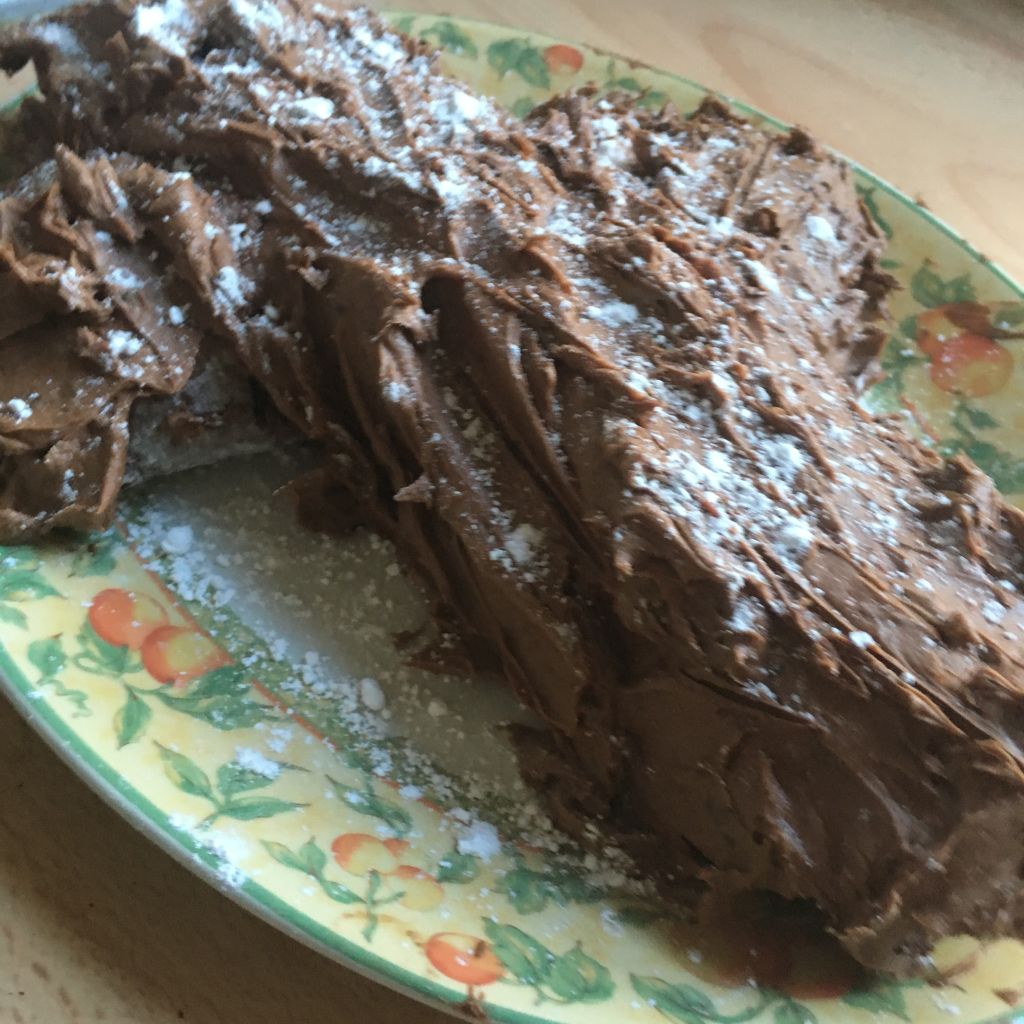 Tastes amazing – very unlike a tree.

The recipe is a bit fiddly at times, but the results are worth it. Now, if you’ll excuse me, I need to go and wipe the chocolate off my mouth. 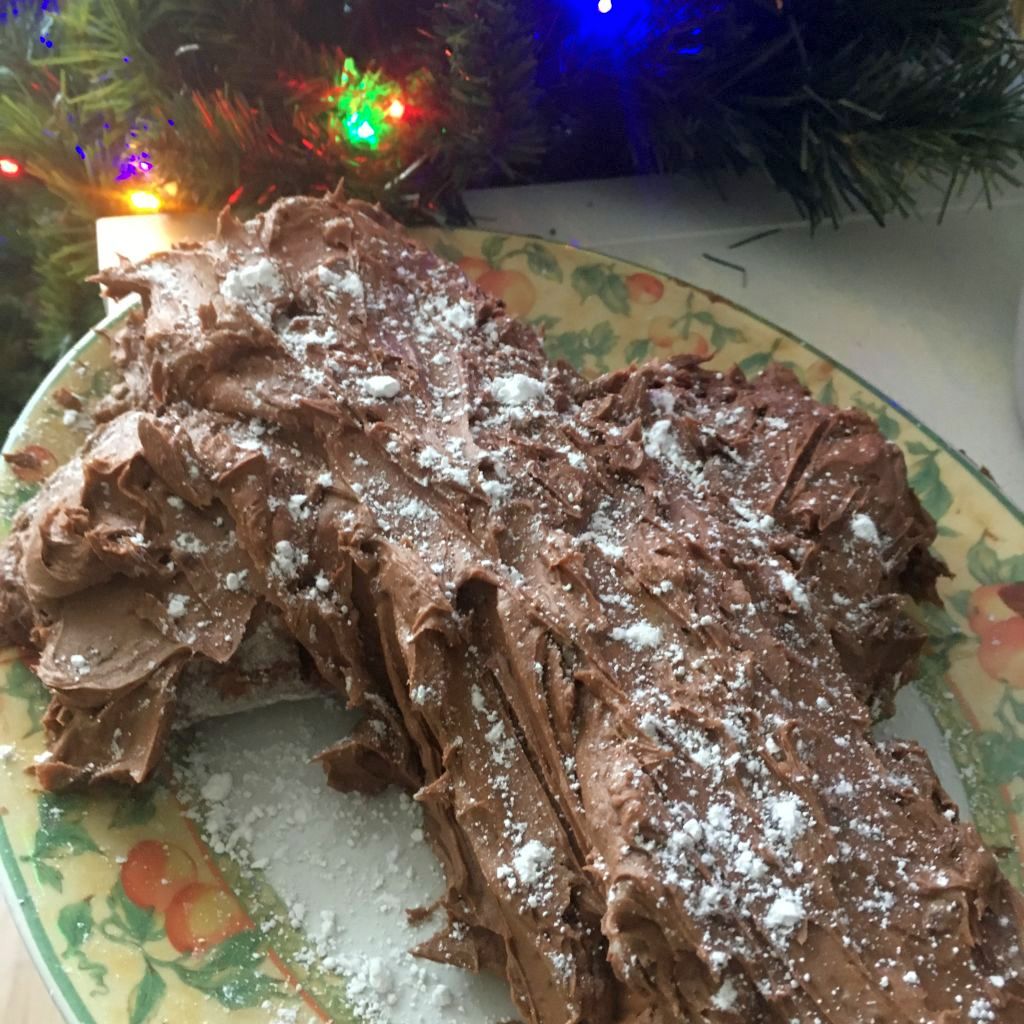