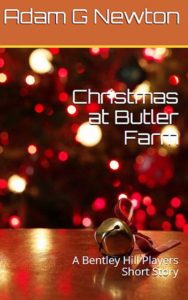 A Short Story For Christmas

When British amateur theatre group The Bentley Hill Players put on a show directed by Jim Butler, Jim’s estranged brother Ted comes to see it. And suddenly, the past is forgotten, all is forgiven, and it looks like a merry Christmas will be had by all.

Ted invites all the Players to come and spend Christmas Day on his farm. Christopher Crumple wants Christmas on the farm to be perfect for his girlfriend, Sophie, as he has romance in mind. Meanwhile, Owen O’Donnell just wants a canvas bag big enough to fit two bowling balls in. Because, you know, stuff.

But as things go wrong one by one, Christopher starts to think fate is conspiring against him, and even the contents of Owen’s bag can’t save him.

A short story detailing the madcap adventures of a group of acting misfits who should never spend Christmas together again. Because Christopher would feel safer that way.

Featuring the characters and continuing the story that began in “The Ghost Under The Stairs”.

Buy it on Amazon here: Christmas at Butler Farm

A Murder in Nether Bumble

The Crater of Bentley Hill