It’s less than a week until Christmas, so the celebrations should now be in full swing. I’ve done Christmas cakes, chocolate salty balls, and probably some other Christmas related stuff, but do you know what I haven’t done? If you’ve read the page title you will. Eggnog!

Eggnog, or egg nog? The debate rages. Can one have nog on its own without the involvement of egg? Can you have different kinds of nog, like hamnog or saladcreamnog? Would you want to? Do I care?

I have a recipe that I have used for the last few years that results in warm eggnog, but I seem to have lost it. Also, I’m am reliably informed by The American that she has never had warm eggnog, and I should not make it. Maybe I will, and maybe I’ll tell her I’ve made a posset, and then we’ll see if she likes it.

In any case, I needed a new recipe, and I found two. One that I had saved from last year to experiment with, and one from AllRecipes, created by Denise Goodman.

But which one is better? Let’s find out.

Denise’s recipe calls for the eggs to be beaten, and everything (including condensed milk) with the exception of the cream to be thrown in with them.

The cream is beaten separately, and then combined with everything else.

Then you put it in a glass, sprinkle it with nutmeg, and swig it. 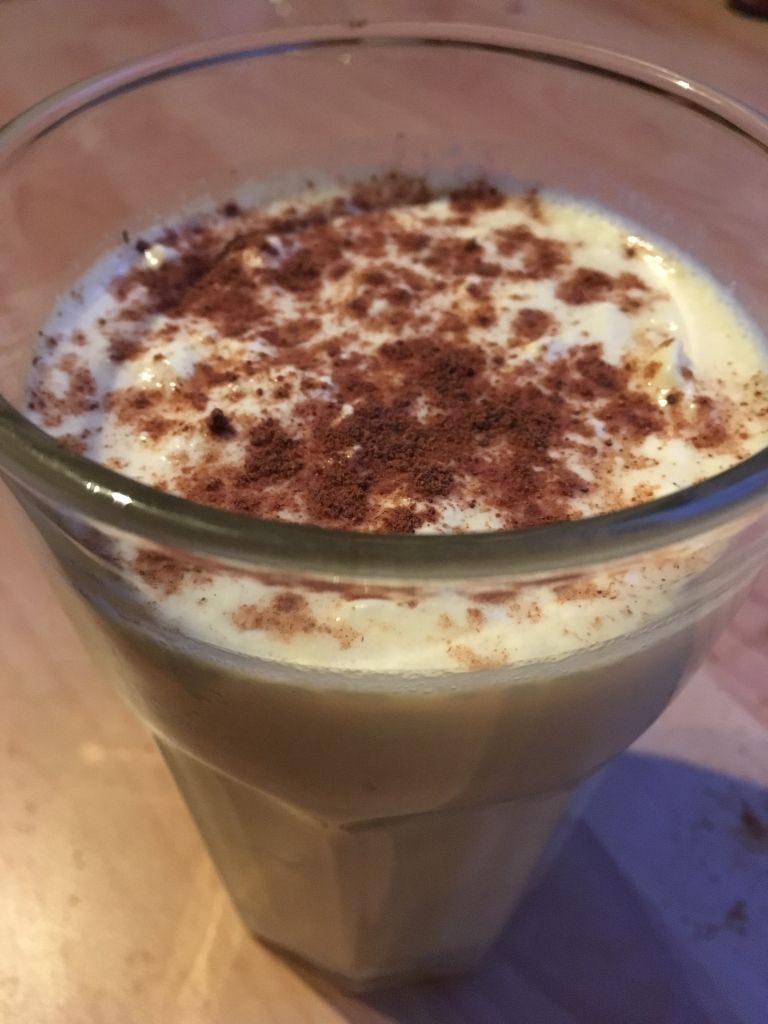 That’s it. It’s at this stage I would normally complain about how terrible the recipe is, but unfortunately, it isn’t. It’s really good. Quick, easy, and tastes spot on. Well done Denise. If I ever have a hall of fame, you might go in it. Or at least your eggnog recipe might.

The other recipe, the one I saved from somewhere last year, is a bit different. We’ll attribute it to the unknown soldier. So, army boy, how does it go?

1 In a large bowl, use a whisk or an electric mixer to beat egg yolks until they become somewhat lighter in color. Slowly add the sugar, beating after each addition, whisking until fluffy.

2 Combine the milk, cloves, and cinnamon in a thick-bottomed saucepan. Slowly heat on medium heat until the milk mixture is steamy hot, but not boiling.

3 Temper the eggs by slowly adding half of the hot milk mixture into the eggs, whisking constantly while you add the hot mixture. Pour the mixture back into the saucepan.

4 Cook on medium heat, stirring constantly with a wooden spoon, until the mixture begins to thicken slightly, and coats the back of the spoon. It helps to have a candy thermometer, but not necessary; if you have one, cook until the mixture reaches 160°F. Do not allow the mixture to boil, or it will curdle. (If the mixture does curdle you may be able to save it by running it through a blender.) Remove from heat and stir in the cream. Strain the mixture through a mesh strainer to remove the cloves. Let cool for one hour.

*Optional: Beat egg whites until they reach soft peaks. Add a teaspoon of sugar and continue to beat until they reach stiff peaks. Gently fold into eggnog. Note, because of the salmonella risk from raw eggs, it is recommended that children, elderly, and people with compromised immune systems refrain from eating raw eggs such as the optional whipped egg whites in this recipe, unless you use pasteurized eggs.

Well, I don’t know how I feel about that. In step 5 you’re telling me to chill, then optionally you’re telling me I might die. I guess life in the army can be tough, but I just wanted a drink. Denise never said I would suffer illness, nay, death, should I drink her eggnog.

Compared to the lovely Denise’s recipe – that’s the recipe that’s lovely, not necessarily Denise…I can’t judge, as I don’t know her, but if her eggnog is anything to go by, she’ll fine – this one is a bit…involved. Whisk this, beat that, juggle it for a bit, chuck it somewhere else, make it warm but don’t boil it, stir it the whole time…LEAVE IT TO COOL FOR AN HOUR…look, mate, in an hour I’ll be on to something else. There’s chocolate round here, and other goodies. Don’t expect I’m going to wait forever for you. 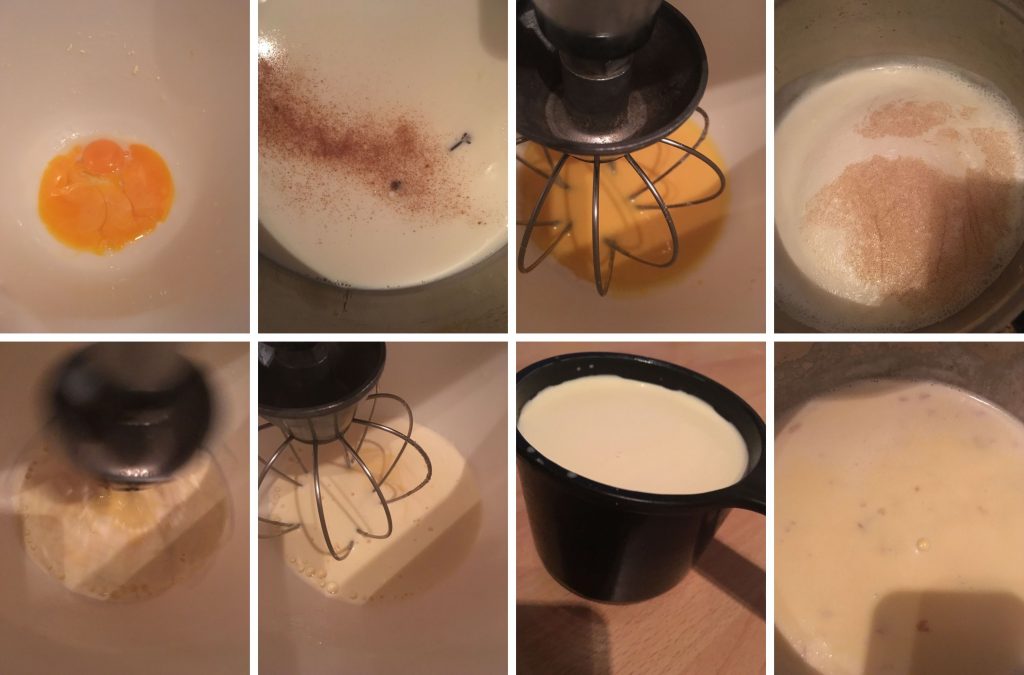 Looks OK. Tastes alright. Not as simple and easy as Denise. 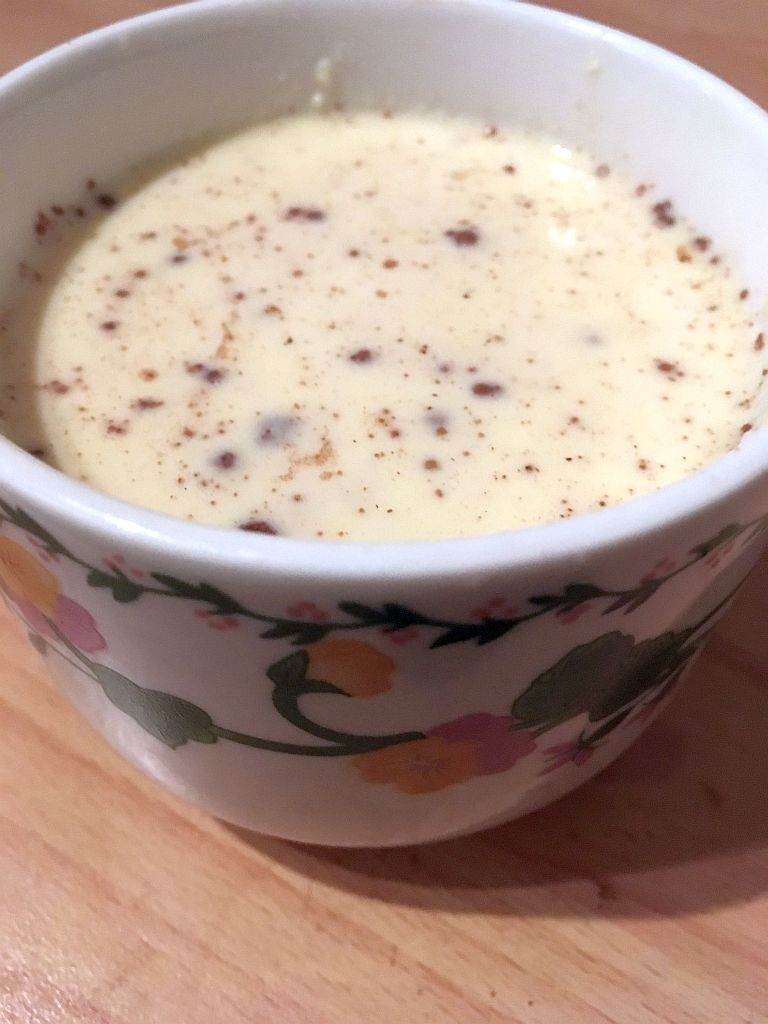 I meant her recipe was simple and easy, not Denise herself.