You might have heard of the breakfast bagel before, as McDonald’s sell a reasonable variation of it. Or at least, they used to. The old version of it contained a pork sausage patty, scrambled egg, and a buttery sauce on top – the new version doesn’t have the sauce, which is what made it so great. The alternative contains bacon and scrambled egg, and the bacon is as good as you’d expect – not a hint of crispness in sight.

So I came up with my own version. It’s full of buttery goodness and works out a lot cheaper than a trip to McDonald’s! 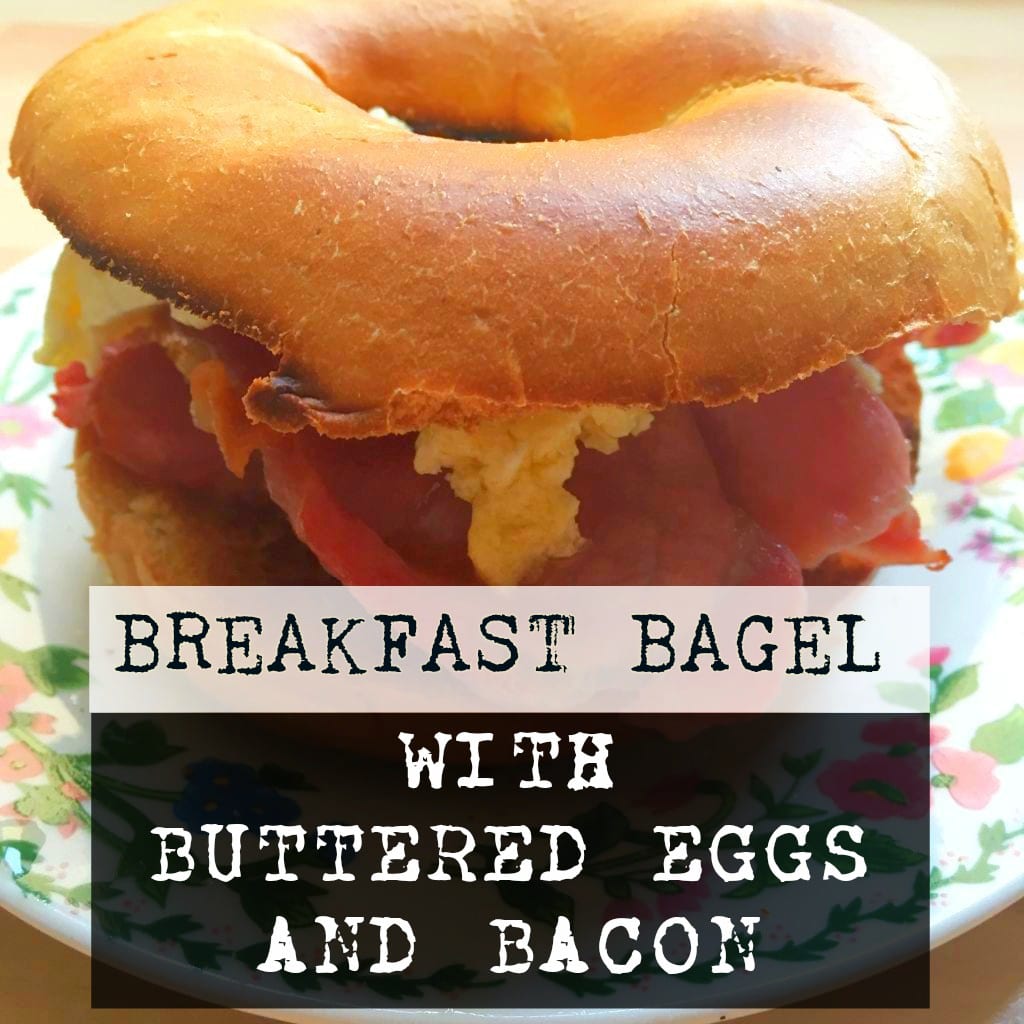 But what are buttered eggs?

I first heard about the in the BBC production of The Box of Delights, as they are most likely what’s going to be made for tea. They also made an appearance in the book the TV show was based on. But that still doesn’t explain what they are.

Enter Mrs Beeton, a Victorian journalist and writer who was the 1860s equivalent of Delia Smith or Julia Child. Her cookbook, The Book of Household Management, is not only a classic, but filled to the brim with butter. And that’s not a bad thing.

Here’s the recipe for buttered eggs a la Mrs B:

Mode – Procure the eggs new-laid if possible; break them into a basin, and beat them well; put the butter into another basin, which place in boiling water, and stir till the butter is melted. Pour that and the eggs into a lined saucepan; hold it over a gentle fire, and, as the mixture begins to warm, pour it two or three times into the basin, and back again, that the two ingredients may be well incorporated. Keep stirring the eggs and butter one way until they are hot, without boiling, and serve on hot buttered toast. If the mixture is allowed to boil, it will curdle, and so be entirely spoiled.

Sufficient – Allow a slice to each person. Seasonable at any time.

So quite straightforward. Here’s my variation on it:

INGREDIENTS – 1 or 2 eggs per person, 15g of salted butter per egg. Or just a dollop of butter, you choose.

Method – Break eggs into a bowl or cup. Smack ’em around with a fork. Chuck the butter in a frying pan or wok, melt it on low heat. LOW HEAT is important. When liquid, pour it into the eggs. Then pour the whole thing back in the wok, stir it every now and then but keep it on low heat. It’s done when it’s solid and yellow.

They’re quite like scrambled eggs, but no faffing about with milk or anything. And it doesn’t need seasoning, because the salted butter takes care of that for you.

But how are we going to get that into a bagel?

Simple. When it’s nearly done, don’t stir it. It will set into something like a thick omelette. If you use the appropriate layering method (below), it works nicely.

Right, let’s get cracking with a breakfast bagel! Fire up the grill (or broiler or something if you are American) and get grilling some back bacon, probably 3 or 4 rashers per person. Using American bacon? Don’t bother. It’s not as nice. But seriously, you’ll want enough to cover the bottom of the bagel twice. Smoked bacon also works.

While the bacon is grilling, make the buttered eggs. The exact timing of this will vary depending on how crispy you like your bacon.

When the bacon is just about done, slice the bagel(s) in half and put them inside-up on top of the bacon, and grill them until toasted. This way, the outer bit doesn’t go crispy (which is not too nice on a bagel) but it is warmed by the heat from the bacon, and will also pick up a little flavour too.

Remove the bagel from the heat when done, and put a little butter on it because bagels are better when they are moist.

Put the buttered egg on top, preferably in one piece if you can. If you’re feeling adventurous, add a slice of cheese on top of it.

Add the lid to the bagel, and either eat it straight away or bung it in the microwave for 10 seconds to help the cheese to melt (if you added some).

Who needs to go to McDonald’s?

TL;DR: Improve McDonald’s breakfast bagels with the help of a Victorian woman. You should probably read it.