Poppy is our new puppy and we are really excited to share her with you! We hope that she will be a wonderful addition to the family. She’s very playful, but also affectionate – just look at those big eyes!

She’s a little older than many new puppies, and as this post is published, she’ll be 15 weeks old. We’ve only had her a week and have started trying to train her…it’s going as well as you might expect!

Her mum is a Labradoodle and her dad is a labrador, making her approximately 75% labrador. This means that she’ll attempt to eat or chew almost anything, often while experiencing the zoomies that Labradoodles are known for.

Fortunately, getting her to lie down at bedtime is going well. She’s got the idea quickly, but doesn’t want to sleep all the way through. We’ve been woken several times for PLAY!

She seems very intelligent and is picking things up quickly, and apart from a couple of accidents, she’s managing toilet time well. When we got her, she was behind on her shots, and so won’t be ready for walking until nearly September…not that she seems keen yet, anyway. We’ve tried putting a lead on her, but at this stage it’s more of a dragging rope than a lead. No, scratch that…it’s a chew toy!

We’re excited to see what the future holds for her, and we’ll be updating you on how she’s doing. Pretty sure she’ll be popping up on Instagram soon!

Why You Should Read “A Murder in Nether Bumble” 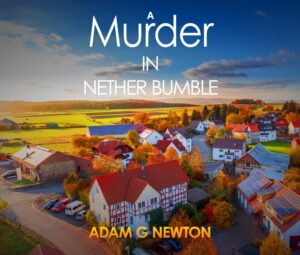